Since inception, CodingZen has nutured and contributed towards the growth of young coders andnee enterpreneurs. Our dedicated Faculty, Curriculam Structuring, Advisory Board and optimum results. Over these years, we have evolved as a learning platform to make sure that we have a competitive have competitive edge over the others. We are always delighted to see our students shine bright and transform their goals into reality.
Check out the stories of how our students have bulit innovative Apps and won prestigious awards as a part of CodingZen. What are you waiting for? Join us potential and get all set for being featured in our next student success story! 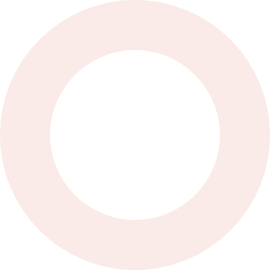 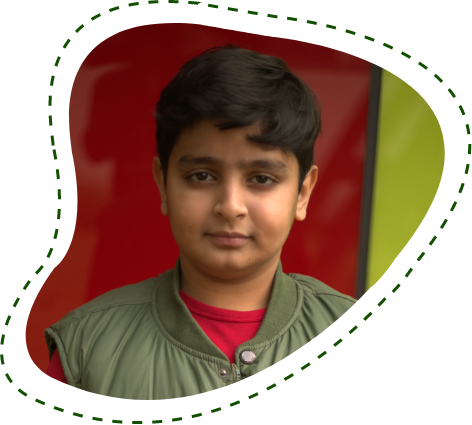 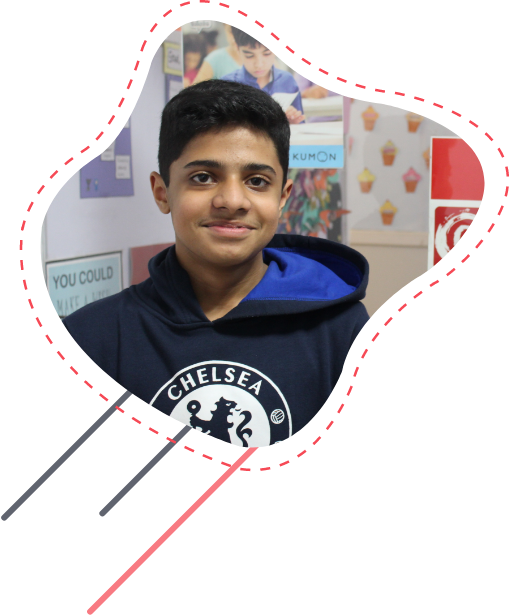 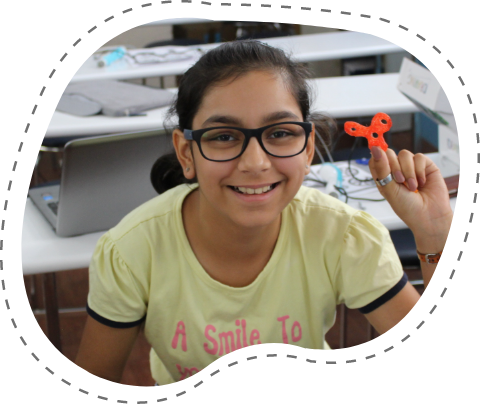 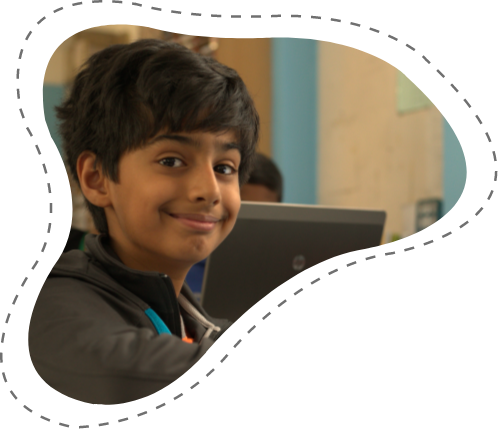 Creator of Apps ‘We can Express’ and ‘Tracked’ 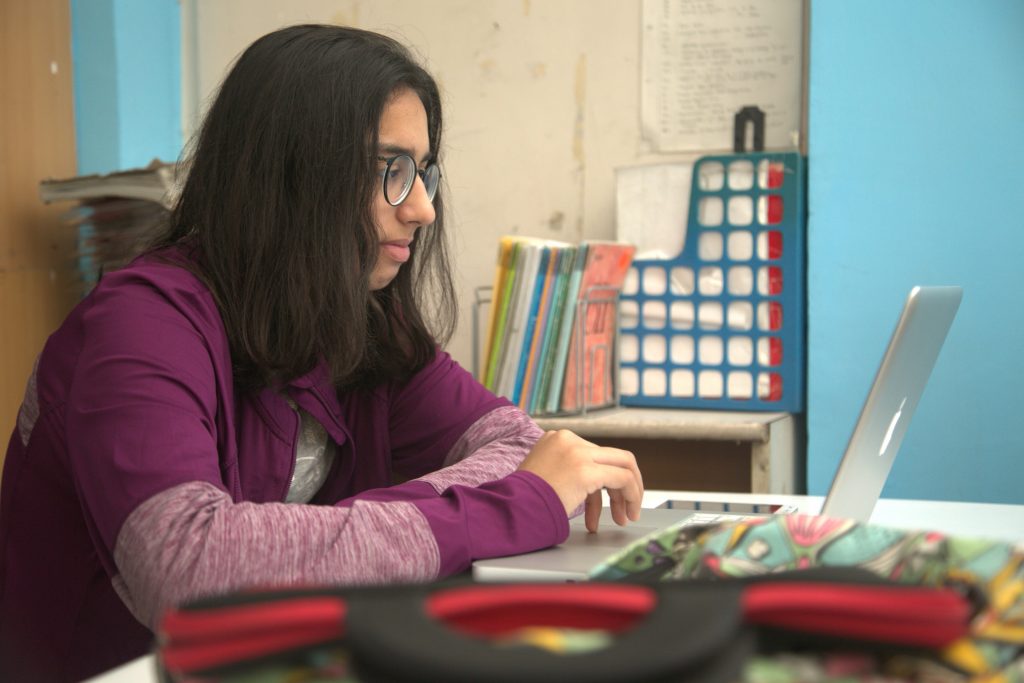 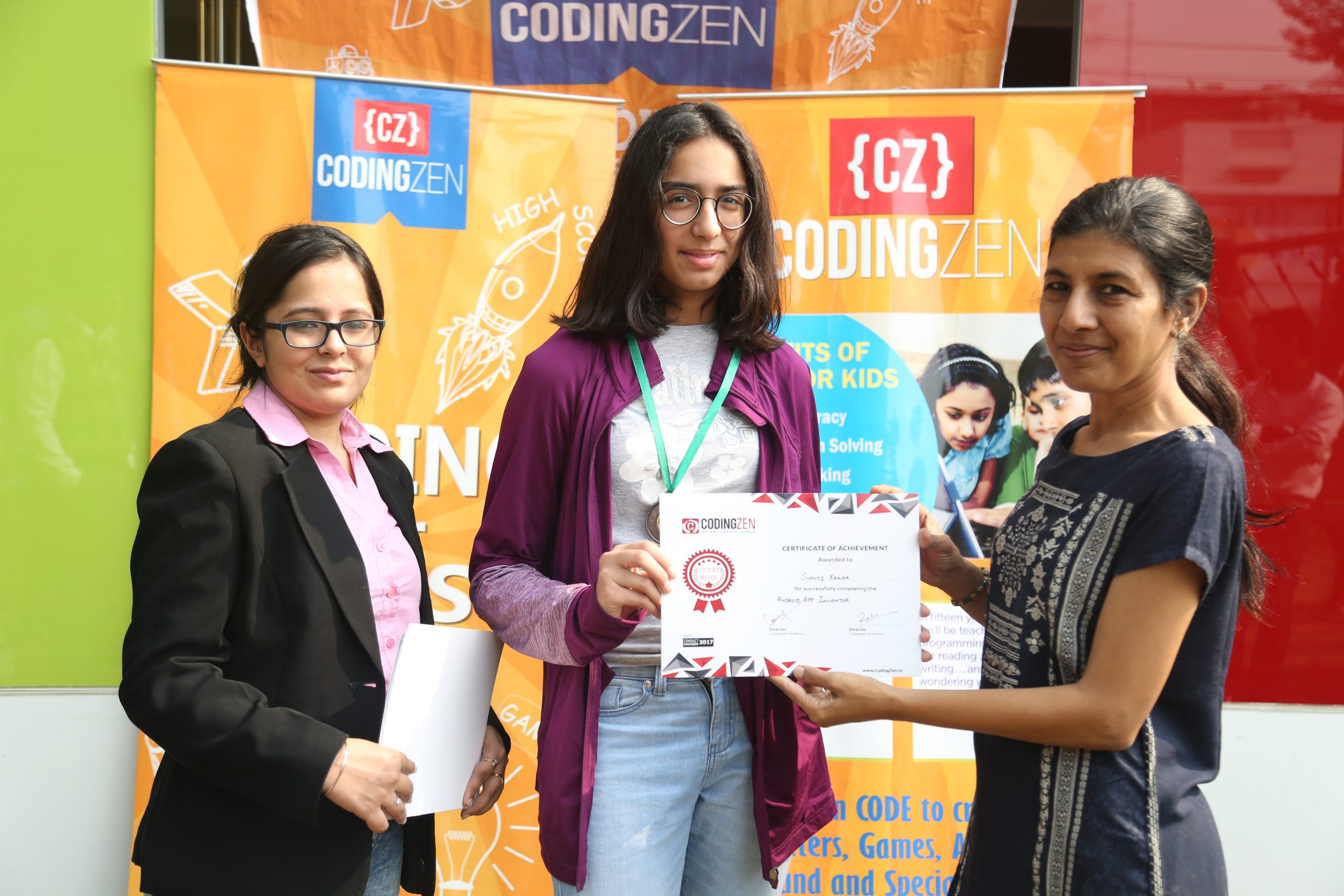 Shruti is a CodingZen alumnus who utilised her passion and knowledge of coding to build an app called “We can Express” for the welfare of kids belonging to the (Autism Spectrum Disorder) ASD community.

The journey of building this App started when Shruti had a chance to hold an interaction with a kid in her mother’s clinic, who was of the same age as her and was diagnosed with ASD. She understood that autistic kids like him have difficulty in understanding or perceiving emotions and situations as others outside the ASD spectrum. Therefore, she was determined to build an App that would help bridge the gap between the ASD community and help ease communication for them. That is how “We can Express” came into reality. The App helps these kids to communicate through Digital ways using pictures and texts. To make sure that her App delivers a great output, she pilot-tested her App on 5 people from her school centre who showed positive changes. Therefore, on its success, she had decided to launch the App commercially and leased it out to Seutara Pvt Ltd. To perfectly balance her day, she has devised a 6-slots-schedule, which gives her optimum time to invest in coding and academics.

When asked to share her experience with CodingZen, she said,”CodingZen has been instrumental, initially starting with my project in 2018. I had developed other applications with CodingZen’s help prior to ‘We Can Express’. I was confident about my ability to code and found myself discovering various resources for advanced coding.”For young Coding enthusiasts, Shruti’s mantra for achieving excellence is “doing what you love” and following your passion. As it will help you to achieve your goals while you’re completely invested in them. Shruti has an ambition to further hone her skills in the Artificial Intelligence area by pursuing higher education and eventually working in this field. The achievement of our student has also been featured in various prestigious media outlets such as HindustanTimes, BusinessBytes and HNews.

Apart from ‘We can Express’, Shruti had previously created an App called “Tracked” under the guidance of CodingZen. Tracked presents you with real-time data of bus tracking details. After missing a lot of school busses and getting anxious about making it to school on time, she realized that there might be hundreds of other students who might be facing the same issue. This is how she got the idea to build an App to solve this problem.

‘Tracked’ is an easy to use, real-time bus tracking App primarily designed for schools to provide parents and students with a simple way to track the bus with just the help of a smartphone. The Parents would get a notification regarding the bus departure, Estimated Time of Arrival and the Fastest way to reach the bus route through an in-built GPS Tracker.

This App will bring a huge sigh of relief to both parents and students as they no longer have to stress about missing the school bus and will also ensure that kids reach back to their homes safely!At CodingZen we are always delighted to watch our students learn, grow and realize their goals. We are very proud of Shruti and all the achievements she has made to date. To know more about her and her achievements watch her speak with us on Shauryaveer’s Interview! 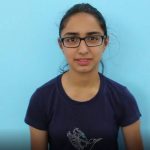 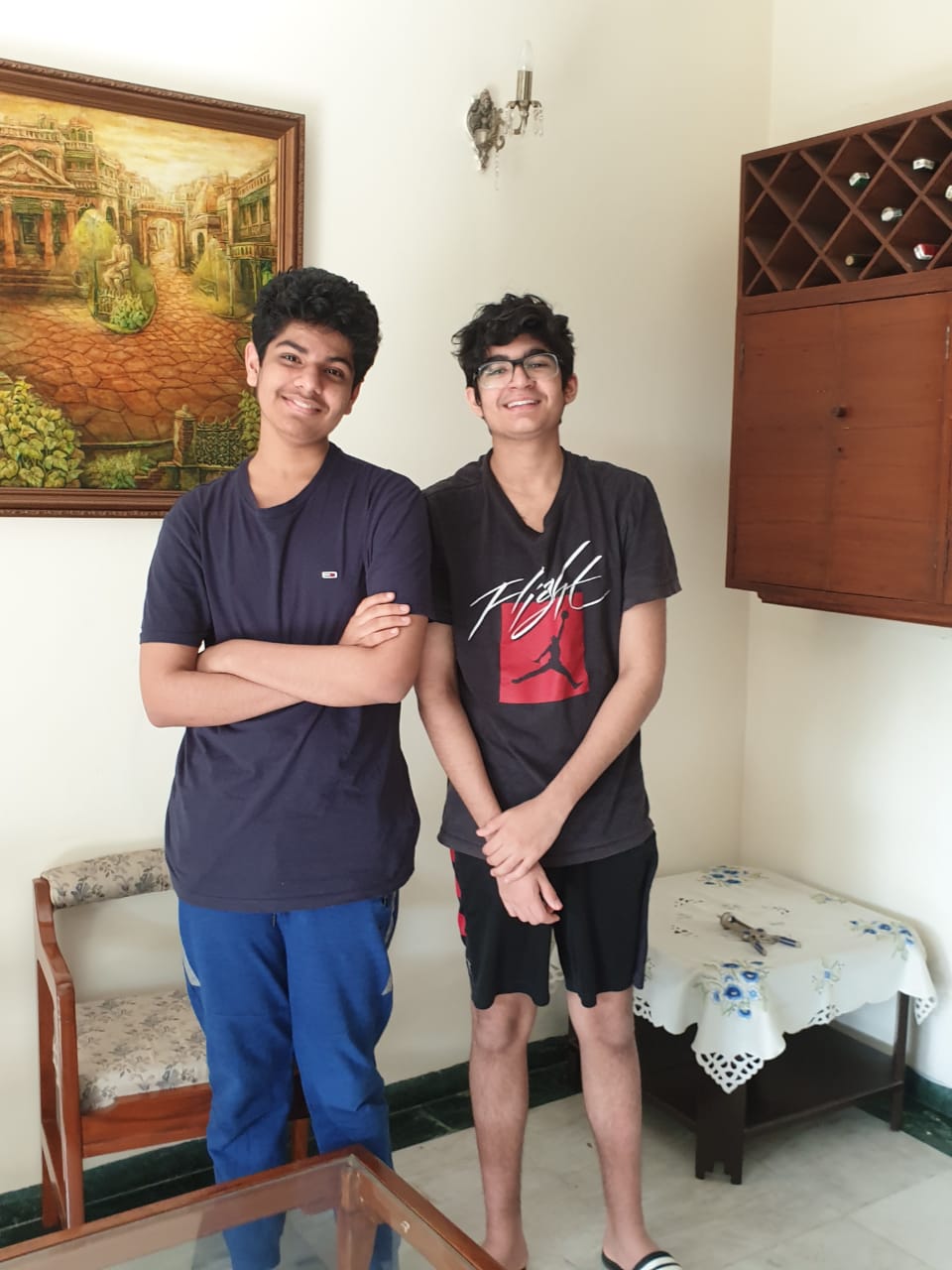 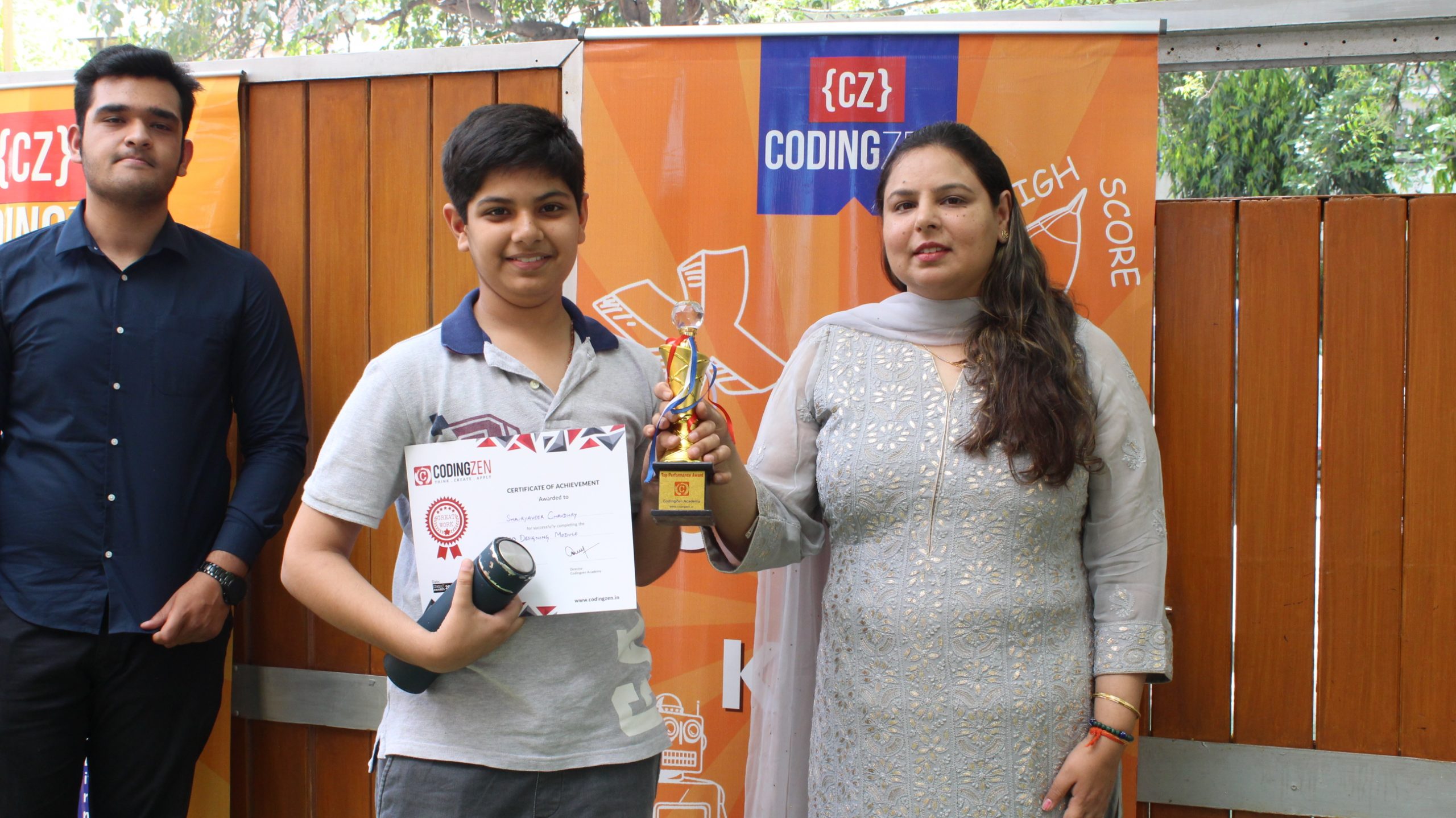 Shauryaveer is our existing CodingZen student, who wasn’t much interested in Coding when he started but went on to bag first place in the TechSpark Web Designing Competition.

After having a feeling of failure twice to build a suitable wireframe within the time constraints, his last effort turned out to be a huge success. The win was a surprise for this young coder as he was not really sure that he could make a great official website within the time constraints. But as we say, the third time’s a charm. It turned out to be true for him. According to Shauryaveer, CodingZen has helped him polish the fundamentals of programming and grow in this field.

“CodingZen gave me the flexibility to choose what I want to learn. My teachers always guided me however the learning pathway was my own.” says Shauryaveer. He loves to spend his free time streaming Netflix, listening to songs and playing Fortnite. But, balances his academics and coding by spending his day doing academic work and late-night coding.

When asked about the importance of having a strong foundational knowledge, he believes that there is no point in skipping the basics as each advanced level of programming language would require a great understanding of the basics.

The three tips that he would like to share with his juniors regarding how to excel in Web Development are Wireframing, SVG Images and finally, do not try to stretch the Websites.Even though he has not given a lot of thought regarding his future plans, currently he is focused on building his own JavaScript framework along with his group of friends.

Shauryaveer has shown tremendous potential as a programmer and we’re sure that he’ll continue to grow and shine in whatever he chooses to pursue!To know more about him and his achievements watch him speak with us on Shauryaveer’s Interview!

When asked about the importance of having a strong foundational knowledge, he believes that there is no point in skipping the basics as each advanced level of programming language would require a great understanding of the basics.

The three tips that he would like to share with his juniors regarding how to excel in Web Development are Wireframing, SVG Images and finally, do not try to stretch the Websites.Even though he has not given a lot of thought regarding his future plans, currently he is focused on building his own JavaScript framework along with his group of friends.

Shauryaveer has shown tremendous potential as a programmer and we’re sure that he’ll continue to grow and shine in whatever he chooses to pursue!To know more about him and his achievements watch him speak with us on Shauryaveer’s Interview. 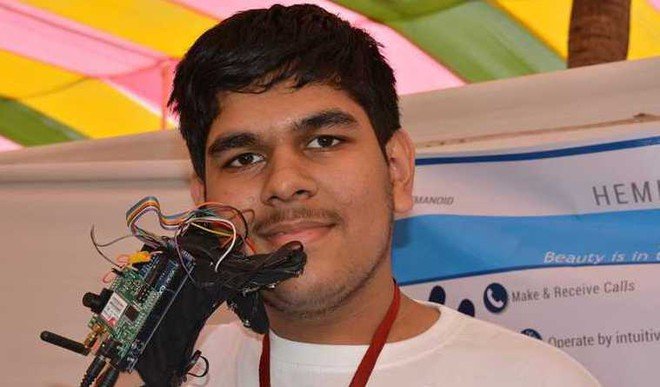 Hemkesh is a CodingZen alumnus who did Web-Development and Unity with us. He went on to bag the prestigious BizzUp Startup of the Year Award in the year 2017. Hemkesh is currently pursuing his Bachelor’s degree in Computer Science from Michigan State University, US.
He is an extremely active student who always has been dabbling with the latest tech. His extremely notable works are
Patent: Be-Hold – A Glove for the V isually Impaired (201611043811 – Published, Waiting for Grant) It is a wearable glove which acts like an input device for the phone, for which he won the BizzUp Startup of the Year Award in the year earlier.
Build and maintain the electronics and software of the car’s infotainment panel which is based on Arduino, Raspberry Pi and Python.

Won the Best Web App award in GrizzHacks and Top 5 Hacks in CalvinHacks
Hosted a webinar series on “Artificial Intelligence for beginners” which was attended by over 200 students from 5+ countries.
Worked as a freelancer to build a COVID-19 screening tool in PHP and SQL which is actively being used everyday by over a hundred employees at Origami Rehab Center.
Currently, he is working as Hackathon Chair, Spartan Hackers, at the University and primarily works with Startups to assist them in building responsive Web Design and cross-platform Web applications.
With his aptitude in Coding and Web Design, he has also created his own website hemkesh.com featuring his portfolio, achievements and more!
Post-graduation he plans to work in the field of Software Development before starting an Artificial Intelligence venture of his own.
We are extremely proud of Hemkesh’s achievements and wish him the best for his future endeavours! To get a glimpse of his achievements checkout entrepreneurship.msu.edu and f6s.com. 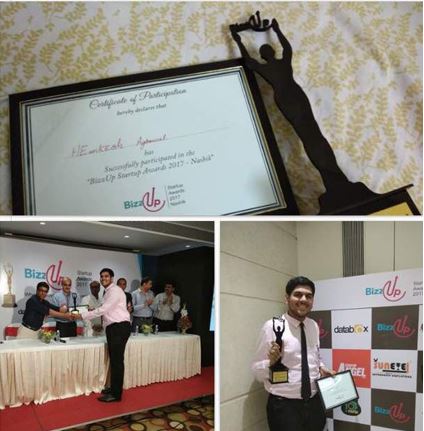 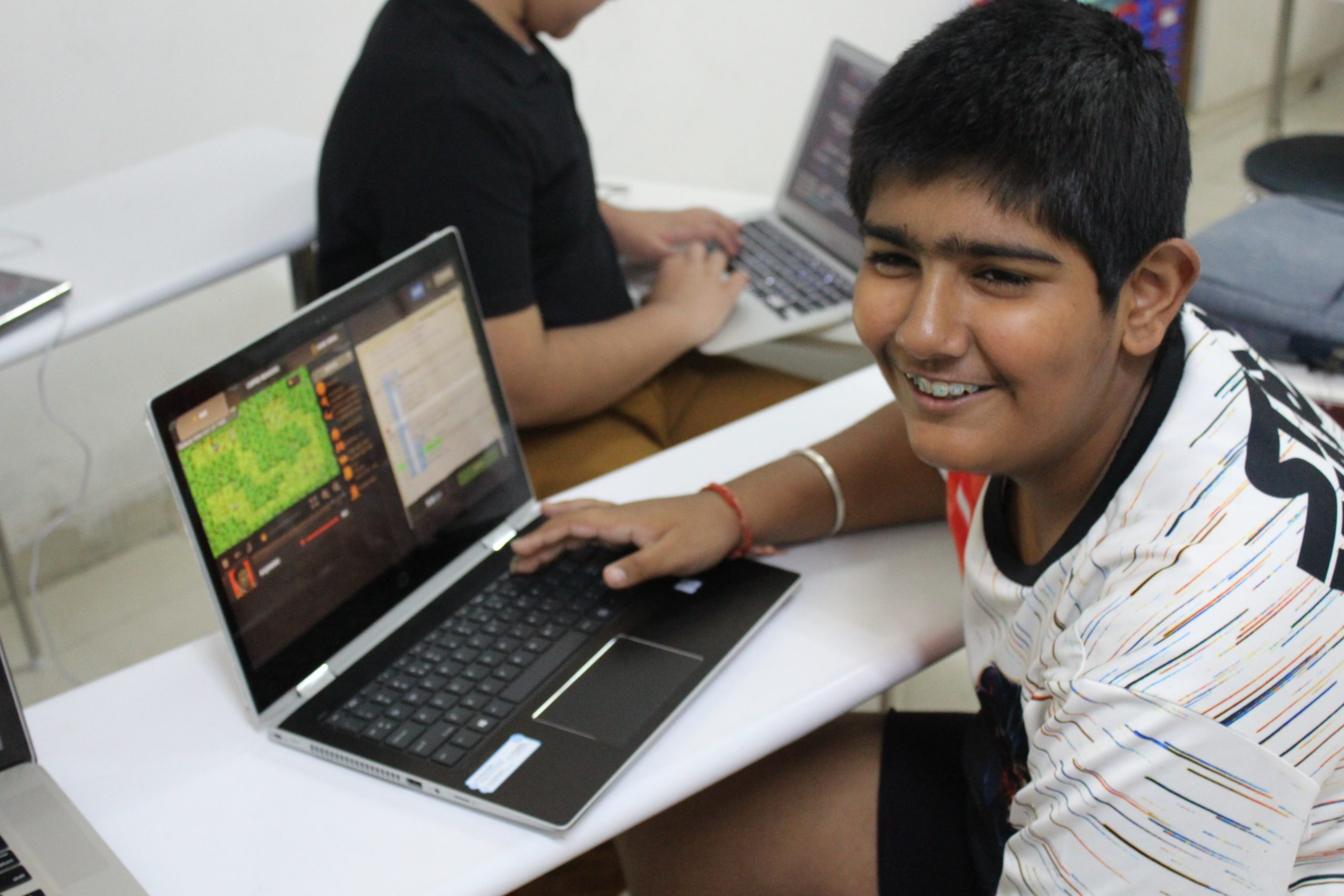 Vaibhav is our existing CodingZen student, who initially decided to try out coding since it appealed to him as a hobby. As time went by, he soon came to the conclusion that coding was meant to be much more than a hobby for him.

“CodingZen gave me a platform to stand on and look over the horizon as to see what lies ahead in the future for this wonderful field.” says Vaibhav.

Vaibhav describes himself as more of a well rounded individual, but with his sight set firmly on the field of Computer Science.  He has a multitude of hobbies, the most notable ones being Theatre, Debating, Writing and learning new computer tech languages.

Vaibhav has achieved either received Distinction or Merit in all the Trinity exams he has given so far for Theatre and has won numerous national-level competitions as well as performed live at notable stages such as Kamani Auditorium.

He is a keen debater and has represented and won trophies for his school in inter-school debates as well.

His other passion apart from programming is writing. He has been an avid reader since his childhood, which compelled him to move into the sphere of writing. He has written and published a 50,000 word fictional novel, titled ‘The Escapades of Toby Turner’ which has had an enthusiastic response from the reading audience. His academic and leadership records in school remain at par excellence as he keeps what he likes call ‘a perfect equilibrium between School and Home’ .

Vaibhav remains adamant on the fact that coding can really help to find that missing piece in a person’s personality and encourages others to try out coding. He insists that once someone is engrossed in programming, it stays with him for life! 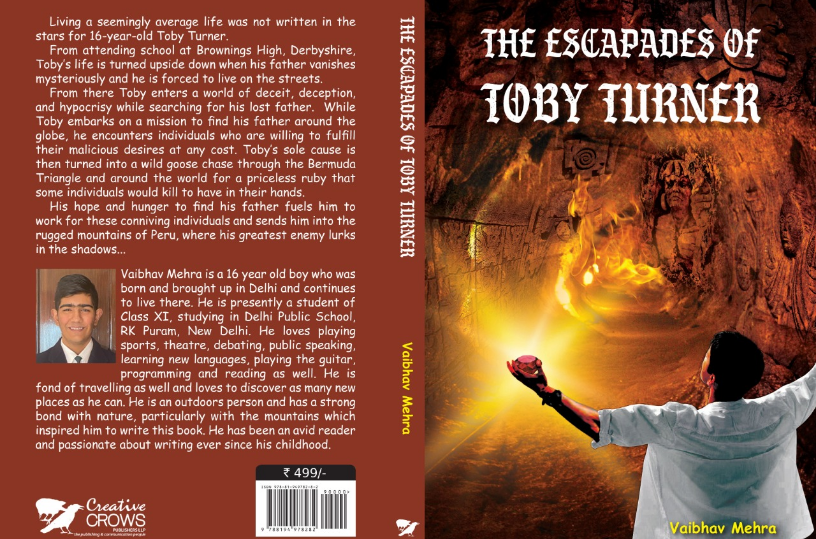 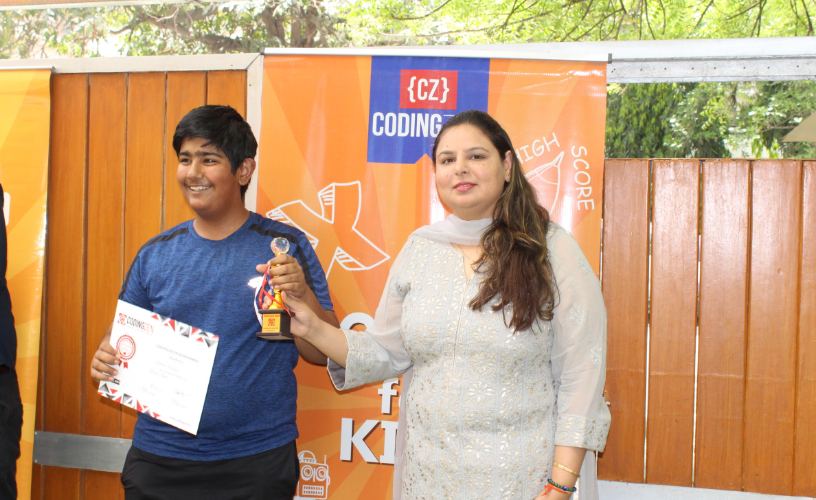